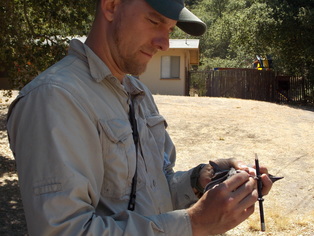 Mario Pesendorfer banding a western scrub-jay (Aphelocoma californica) at Hastings Reserve
Hastings Natural History Reserve has been a hot spot of oak research for many decades. Following in the footsteps of Jim Griffin and John Davis, Walt Koenig has been collecting data on valley oaks (Quercus lobata), blue oaks (Q. douglasii), coast live oaks (Q. agrifolia), California black oaks (Q. kelloggi) and canyon live oaks (Q. chrysolepis) for 35 years. As his postdoc, I was lucky to draw on this data set, and on Walt's experience, and try to answer questions about the proximate drivers of seed production and masting in oaks. In addition, we collected data on the behavior and competition among avian hoarders, such as western scrub-jays (Aphelocoma insularis) and acorn woodpeckers (Melanerpes formicivorus). In the spring months, I conducted flowering phenology surveys on valley oaks at Hastings Reserve, Jasper Ridge Biological Preserve in Woodside, and at Sedgwick Reserve in the Santa Ynez Valley. 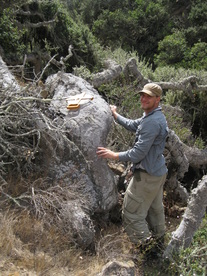 My Ph.D. project explored the interaction of Island Scrub-Jays (Aphelocoma insularis) with their main food resource, oak trees (Quercus spp.). The jays harvest acorns from oak trees when they fruit in Fall and store the seeds for later consumption. During Winter and Fall, the birds rely on their hidden food for survival and not surprisingly, they display quite sophisticated spatial memory when retrieving their caches. In addition to remembering the place of a cache, it is also important to hide the food in such a way that other birds cannot simply steal the precious acorn. Many studies have addressed the spatial and social cognition involved in food caching in corvids, but surprisingly little is known about the actual behavior in wild animals. Therefore I will try to gain a basic understanding of the acorn-harvesting behavior, from selecting specific acorns on the tree to the circumstances of caching in the territory. How selective are jays when picking out acorns? Where do they transport the acorns? Are other jays around when they cache their food? Do the jays adjust their behavior to the presence of others? These are some of the questions I would like to address on the bird side of the interaction.

Another facet of the oak-jay interaction involves taking the oaks' perspective. The jays are not only the main acorn consumers but also hold the pivotal role of long distance dispersers. What are the attributes of acorns that get transported away from the tree? Where do the jays place their food caches? In what type of microhabitat are most of the acorns placed (i.e. patch of grass, underneath a scrub, in the shade or in the sun etc.)? Since oak seedlings are relatively shade-intolerant and need certain soil moisture, the placement of the acorn significantly affects its chances of sprouting. By collecting detailed data on the number of acorns harvested, the spatial and temporal distribution of caches, a model for the potential seed shadow can be constructed. Combined with planting experiments to assess the sprouting potential of different microhabitats, we can estimate the effectiveness of jays as dispersers. One aspect that has been largely ignored in long-distance dispersal studies involving large vertebrates, is the territorial and social aspects of the dispersers' behavior. The territoriality of the birds may severely limit the distribution of acorns from a particular tree. Since we don't know whether jays also regularly cache foods outside of their territory, we may learn a lot from the planned observations. Finally, to get a grasp on the effective dispersal, leading to the establishment of viable seedlings, I will count the number of newly established trees, take tissue samples and conduct maternity analyses.

In the unique setting of Santa Cruz Island, one of the Channel Islands off of Southern California, I had the opportunity to observe a 'natural experiment' as the island is slowly returning to a more natural state after 150 years of farming. Thanks to a large-scale conservation effort by the Nature Conservancy, the land has been acquired from private landowners and all ranching operations have been halted. To protect the endemic island fox (Urocyon litteralis) and other precious species, 30'000 feral sheep and 5000 pigs have been removed and all Golden Eagles relocated. Now, oak seedlings actually have a chance to survive after sprouting and the native plants are slowly taking back the spaces that were cleared to the soil by the sheep. In this broader context, understanding the interactions between the endemic Island Scrub-Jays and the nine oak species on the island (three of which are endemic to islands off of CA), will contribute to informed management decisions. In their role as habitat engineers, the Island Scrub-Jays could play a large role in conserving this unique ecosystem.